If you admire Ben Yates' electronic creations then you will probably want to see Michael Takeo Magruder's digital work - Living Data - on show at Seale Hayne, just outside of Newton Abbot. This is a mixture of digitally created hard copy art and screens which are fed by PCs, linked to the internet.  Here are some photographs which illustrate the work: 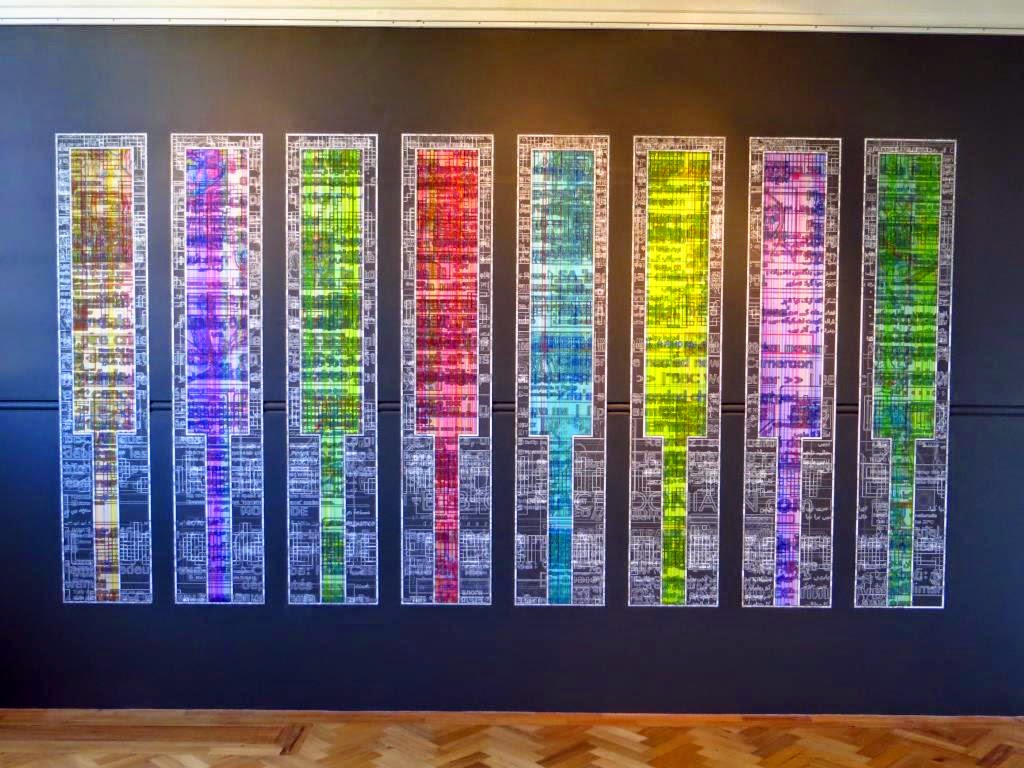 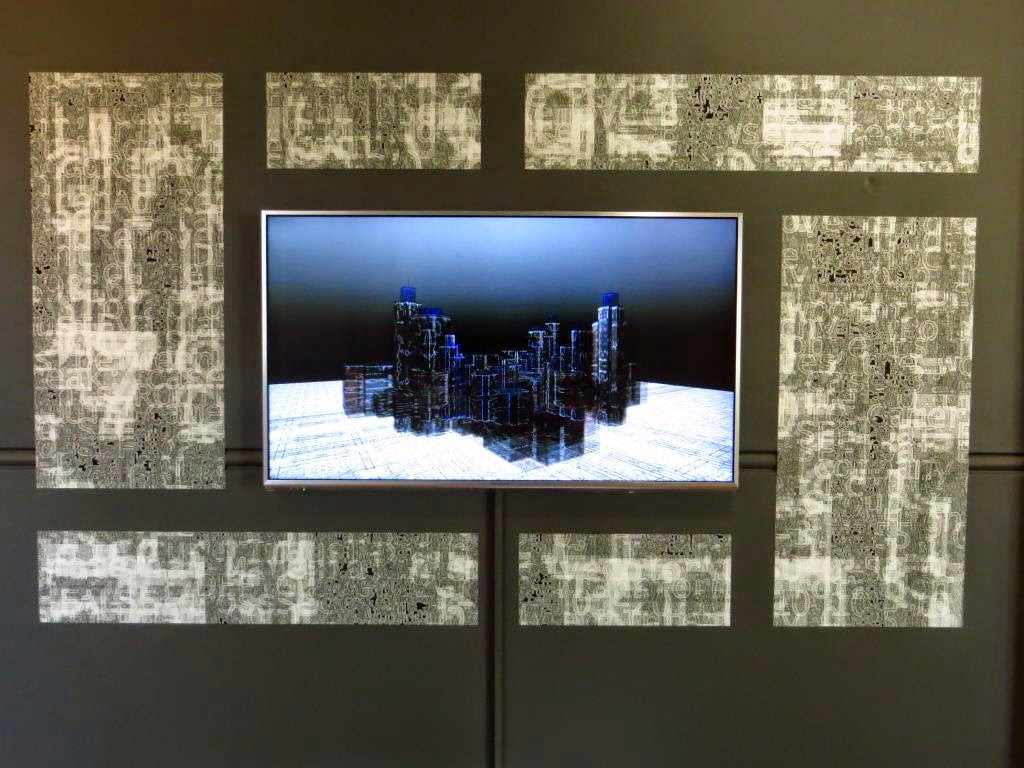 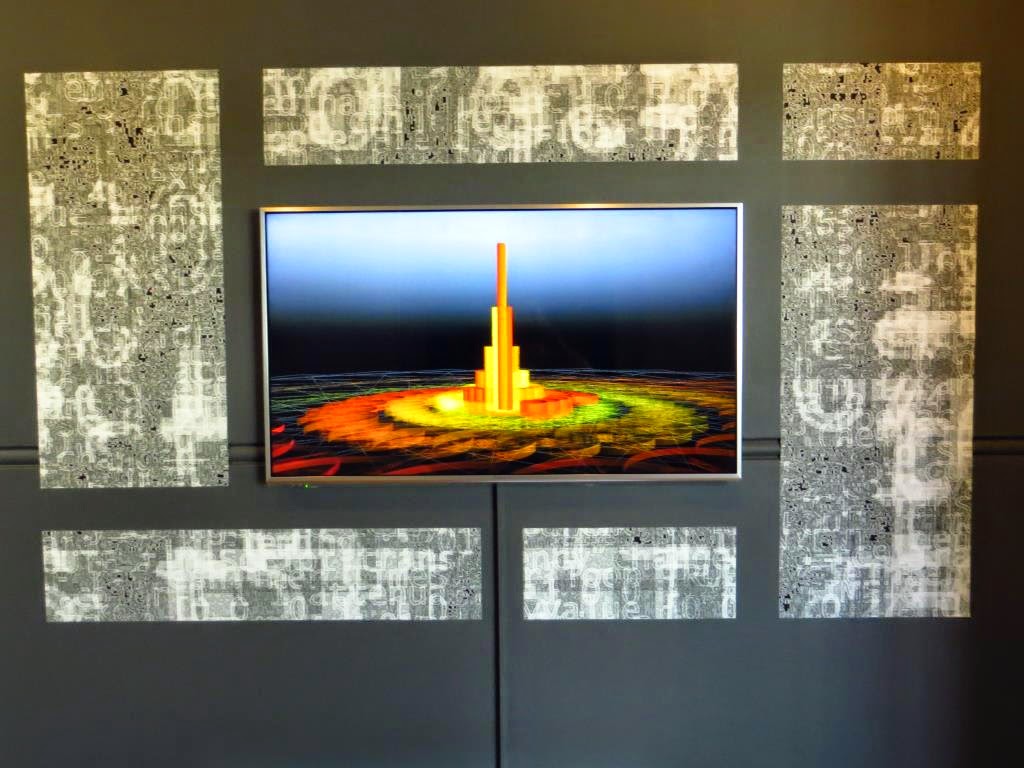 Each of the displays applies an algorithm to an internet information source to produce unique digital visuals. For example, the second work above draws upon a live market feed from the Dow Jones Index to produce its images, while Data_plex (babel), immediately above, is generated by tapping into the top ten topics trending on Twitter, as explained in the exhibit label below: 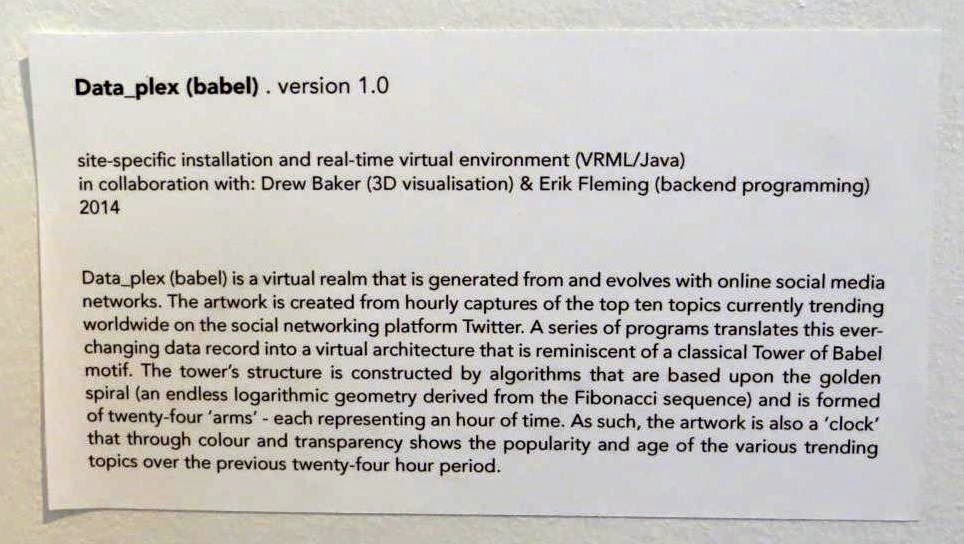 This exhibition shows just one aspect of Magruder's work. Copies of his 100+ page book, (re)mediation_s 2000-2010, with many colour photos and interesting essays by academics covering (Derrida's) Deconstruction, (CP Snow's) The Two Cultures, The Art of Remembering, and more are available at the exhibition for ten quid. This is a bargain, particularly as the book can no longer be bought on Amazon. 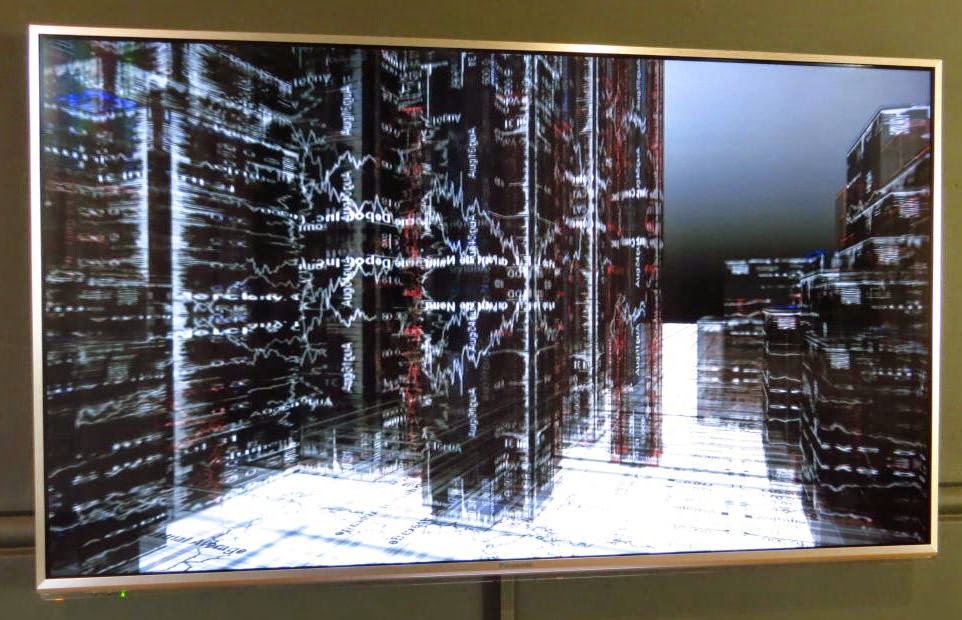 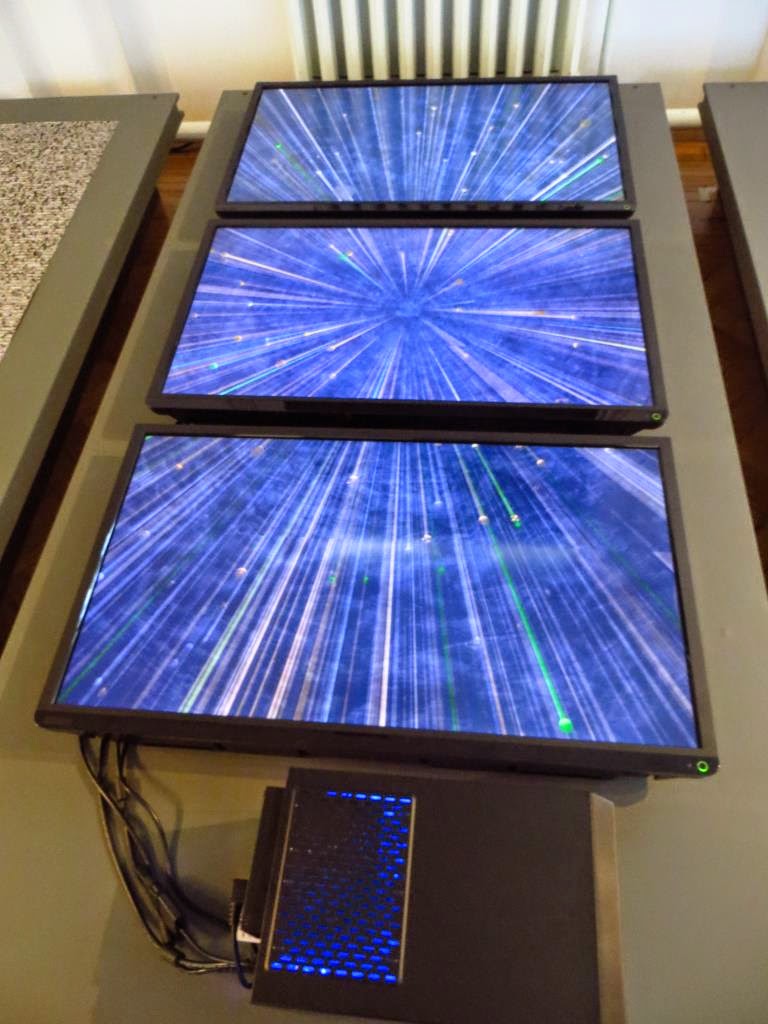 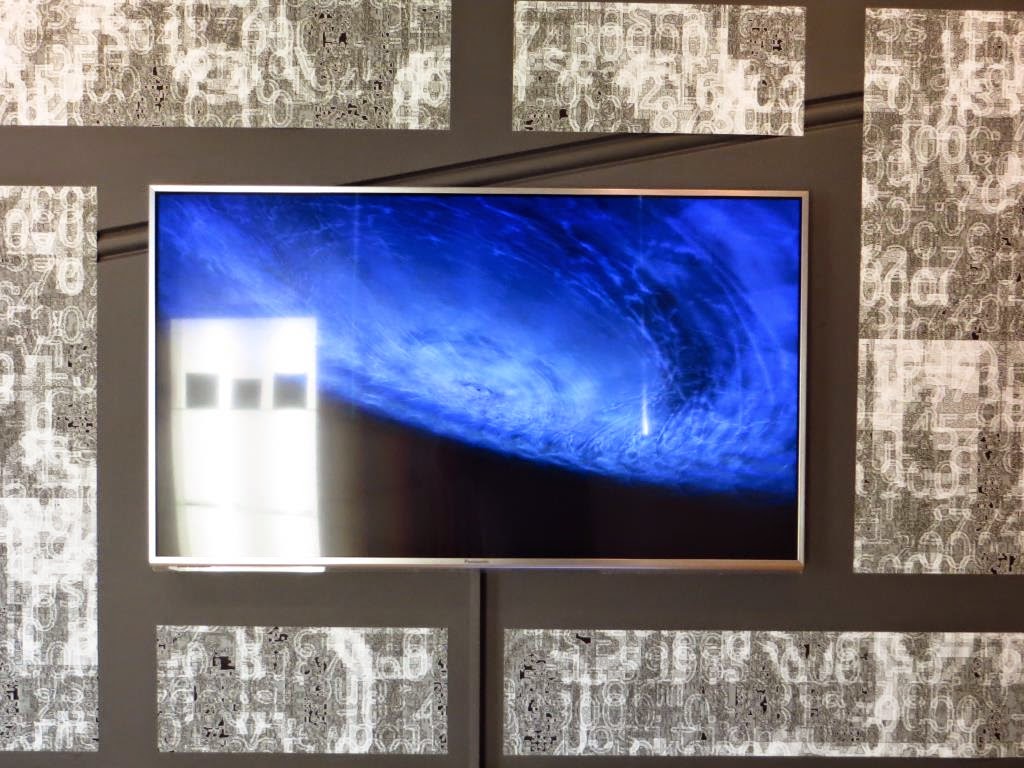 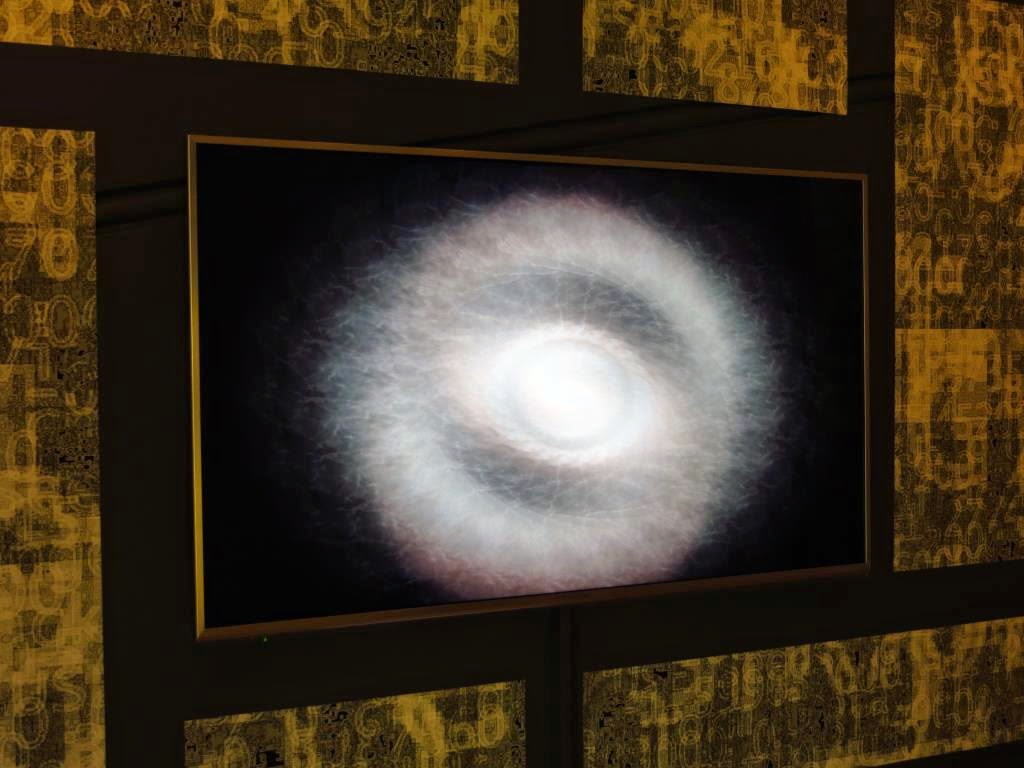 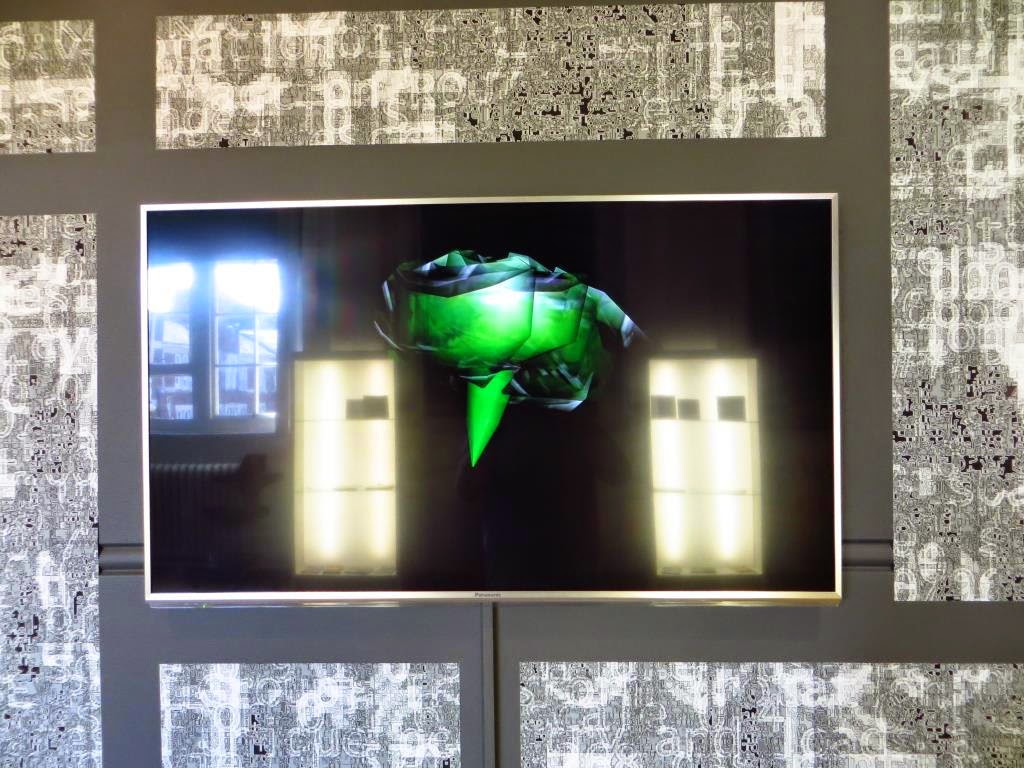 The display above draws upon images of flowers showing on Flickr (as in the monitor below) and produces a hybrid form which changes - in sync - as new images are posted. 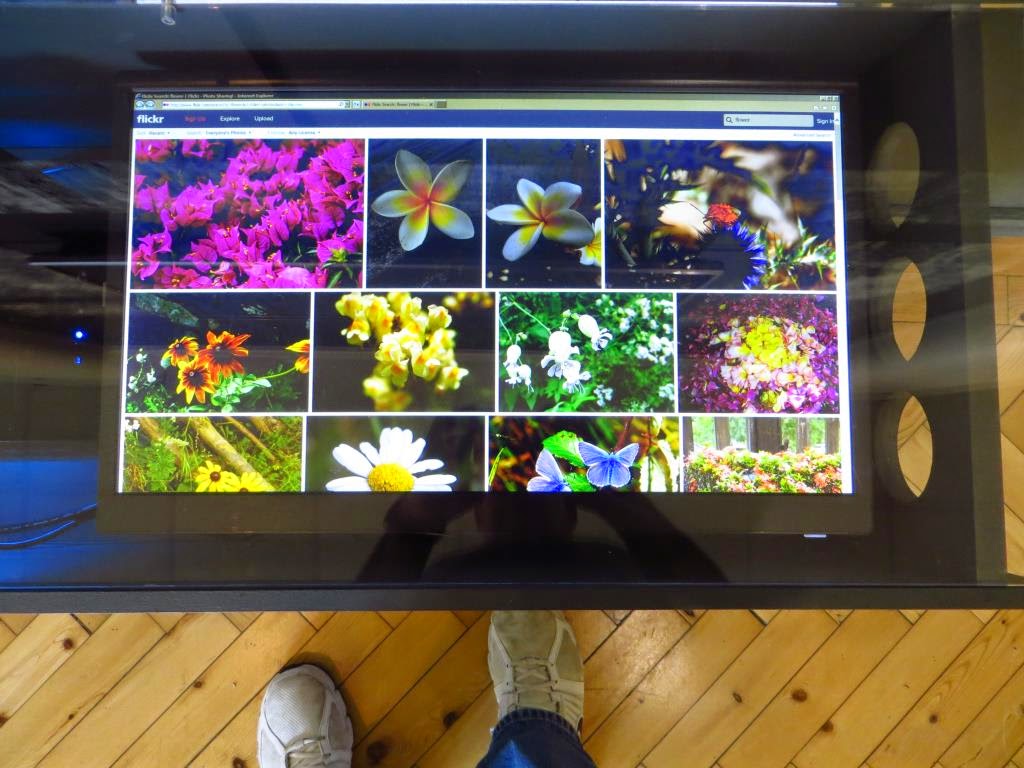 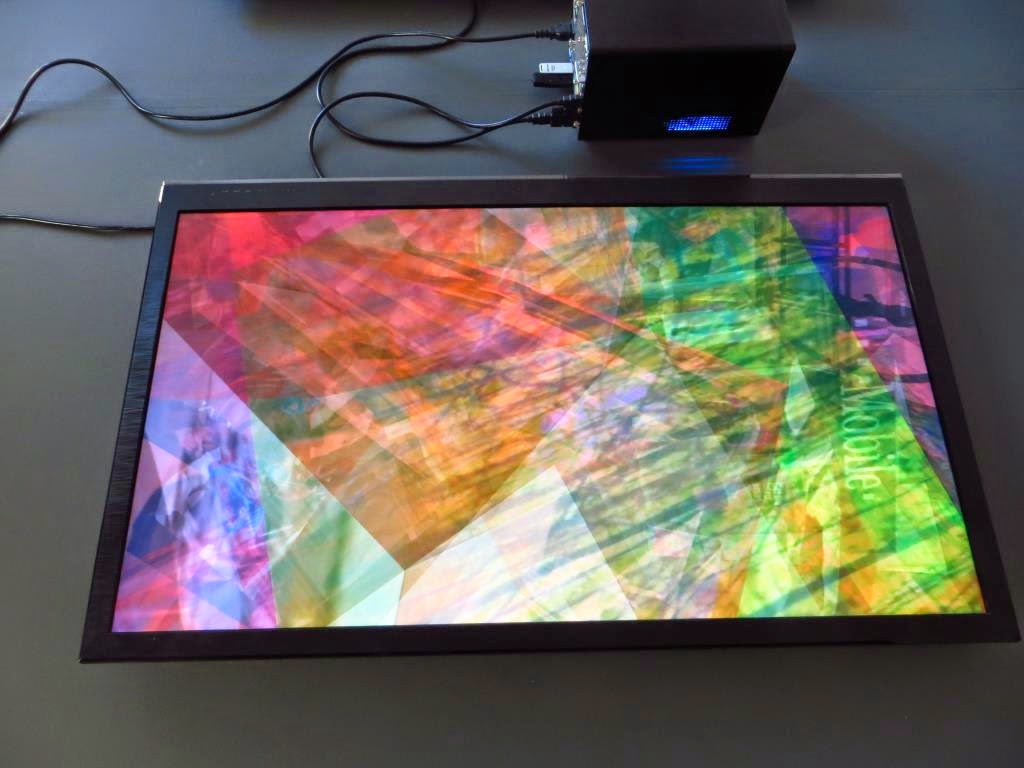 This is a fascinating exhibition. The works seem to be live - which of course they are, insofar as they are responding to the collective actions of thousands or millions of people using the internet. It is impossible to get a realistic impression of the ever-changing images showing on the monitors from still photographs. You really need to visit the exhibition, which is part of the Digital Invasion season at Seale-Hayne, and runs until September 1st.
Posted by Steve at 22:18 No comments:

Yesterday I went along to the Art in the Sun exhibition in Ingsdon, Newton Abbot. The exhibition features the work of five artists in a barn and in the surrounding woodlands and is well worth a visit. It includes Ben Yates' studio where you can see his electronic creations. When I visited, Ben kindly spent some time explaining to me how he creates these pieces and answering my questions.


I've previously seen Ben's awesome creations when he was exhibiting at TAAG, and posted some photos in my blog. In the current exhibition you can also see a number of his clever photocubism pieces - photographs combined with wood cubes of varying depths (are they still cubes?) - unusual and nicely executed work.


There is also some beautiful sculpture and mixed media work by Luci Coles; and op art (mainly different diamond configurations) by Bob Bruce.


The other artists are Harbz, who brings a touch of urban grit to the exhibition, and stained glass pieces by Amy McCarthy.


This is a fascinating mix of work displayed in an idyllic setting, when the sun is shining. I only hope that this weekend remains dry and that people get the chance to get along and see it. 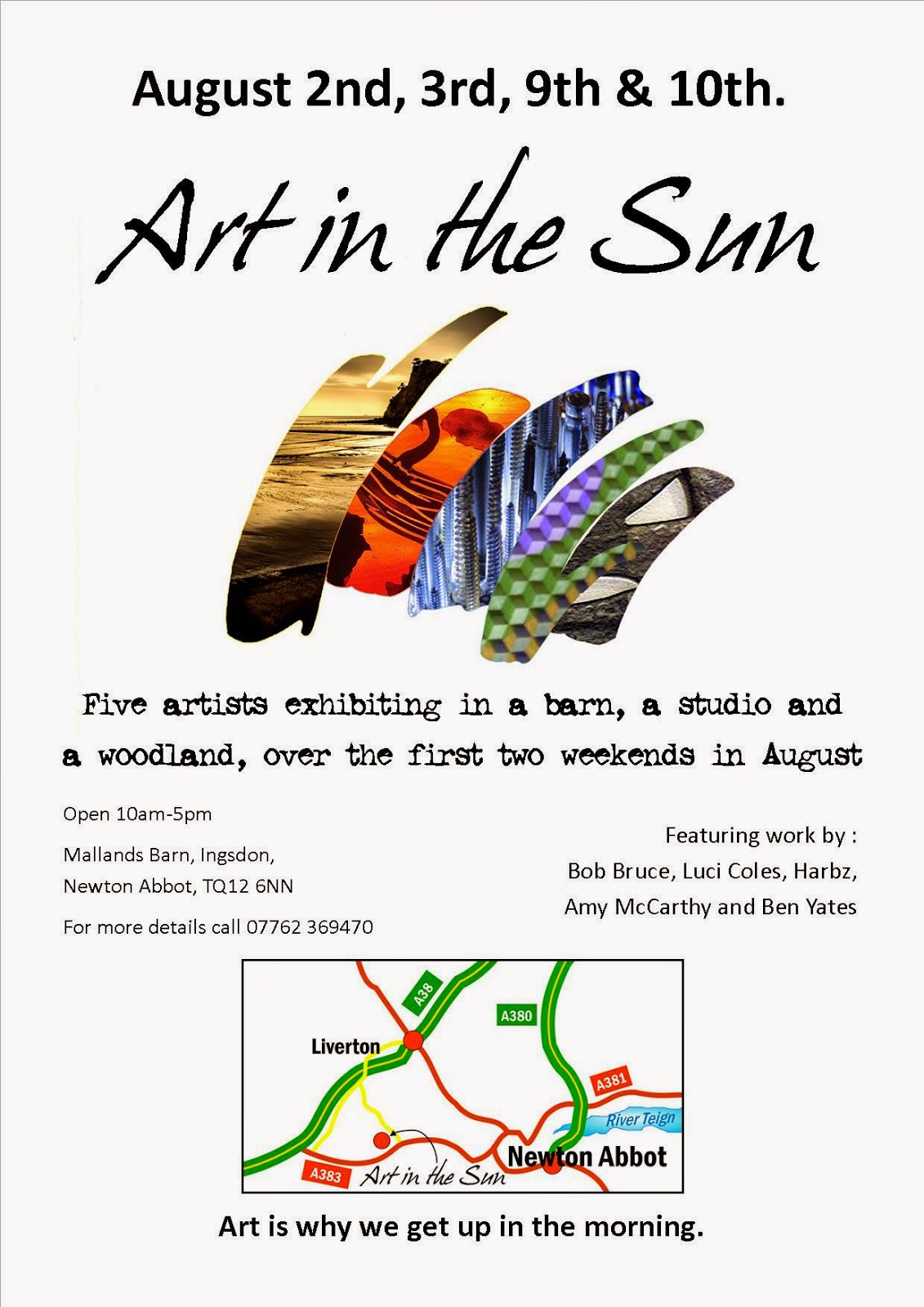 The location is just beyond the turning for Hannah's, on the A383 out of Newton Abbot - so you could easily combine this with a visit to the absorbing exhibition of digital work by Michael Takeo Magruder at Hannah's. I'll be posting about this shortly. 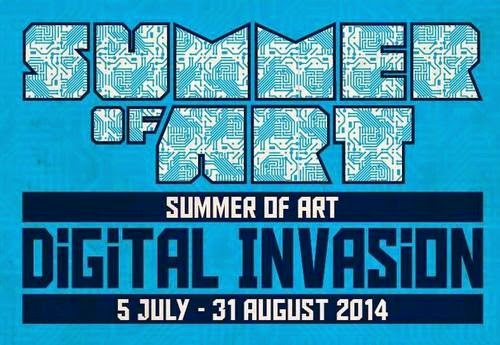 I went to Crediton today and visited the exhibition 'Reflect Crediton' which features the works of Tim Backhouse, Paul McCullough and Nicci Wonnacott. To quote from Tim Backhouse in the Crediton Courier: "The work is based upon social, historical and cultural aspects of Crediton and touches upon a wide variety of themes such as the Link Road, World War One and aesthetic considerations in and around Crediton.” It is an installation-based show including film, sound, sculpture and drawings. 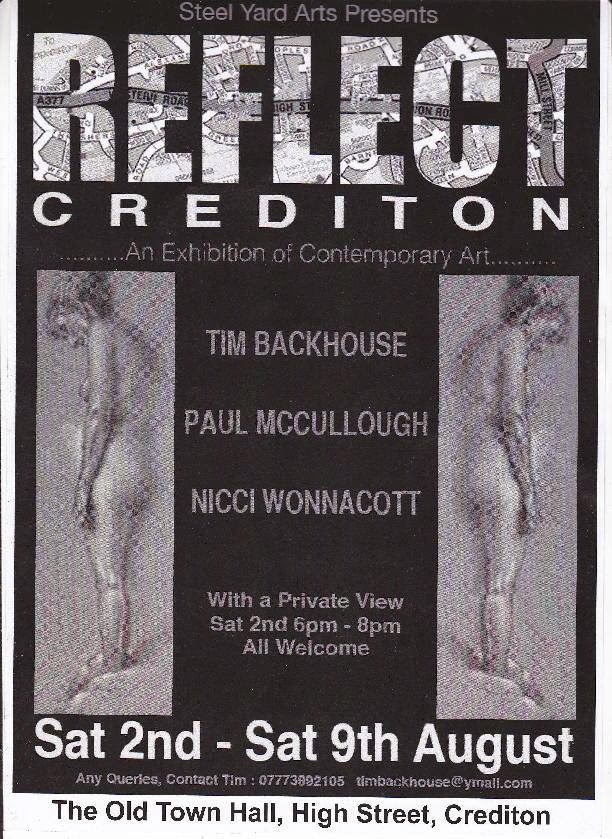 It's been some time since I was in Crediton and there have been some significant changes. The town seems quite vibrant and less shabby than I remember. But it also has a massive Tesco store on its doorstep and a ring road which is not yet open. As an outsider, I can see that these developments are likely to have been contentious - and this forms one of the themes explored in the show. 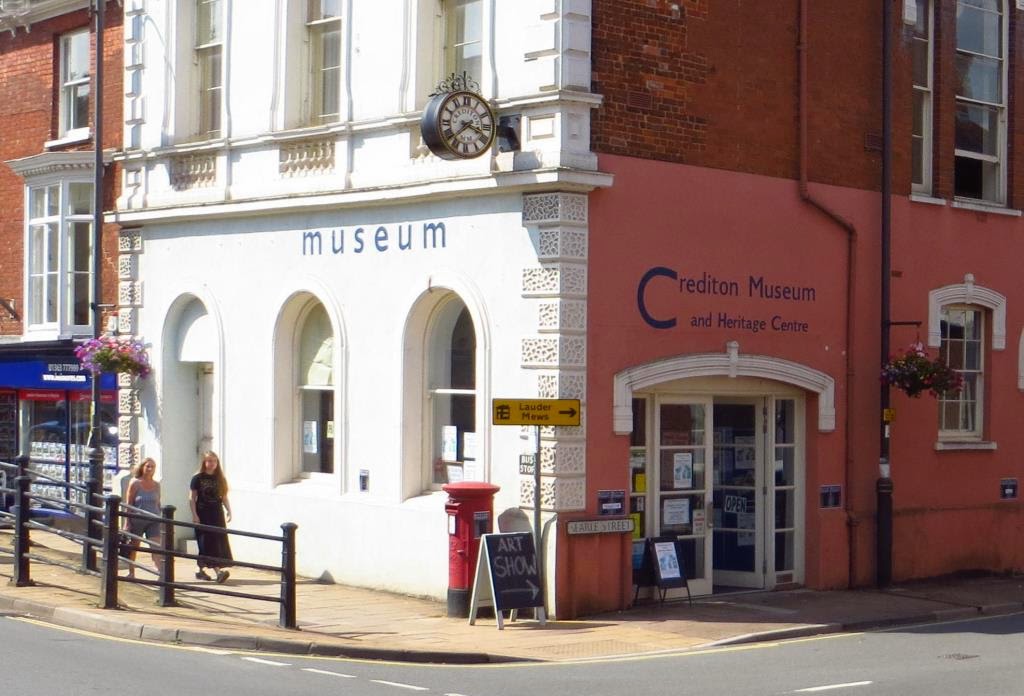 When you enter the old town hall, which is now the town museum, there is an exhibit marking the anniversary of the first world war and reflecting the involvement of people from Crediton. The 'Reflect' exhibition flows on from this, starting with a 'WAR DECLARED' banner and a moving video of wounded soldiers returning from the front, overlaid with a modern soundtrack of children at play. 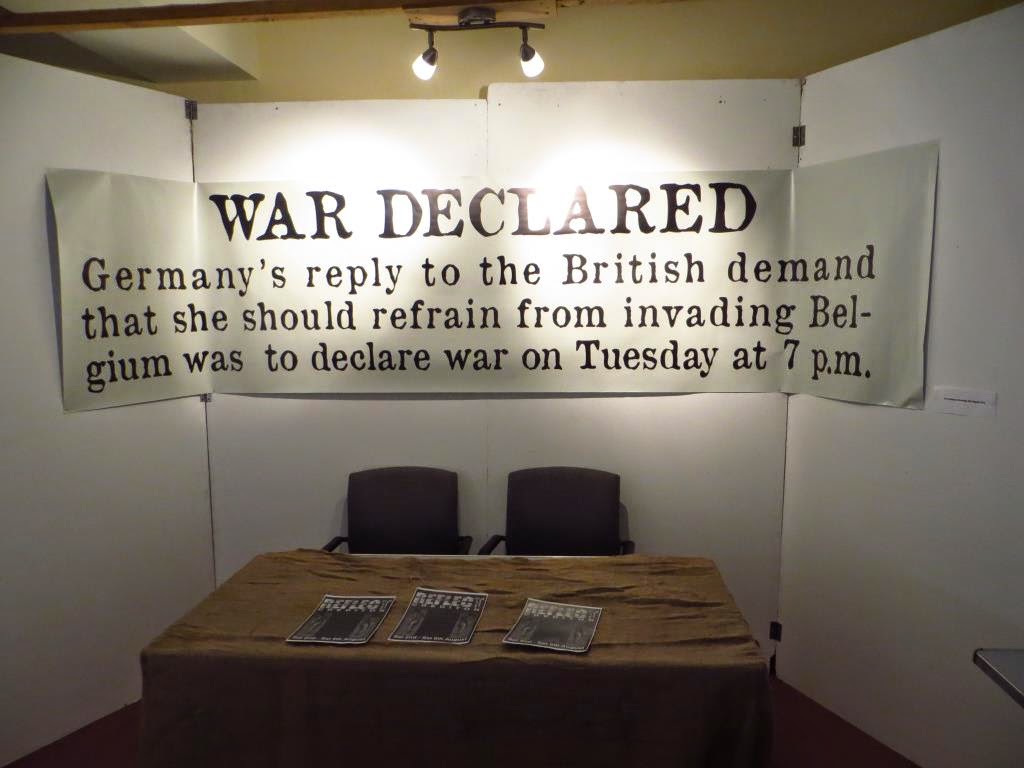 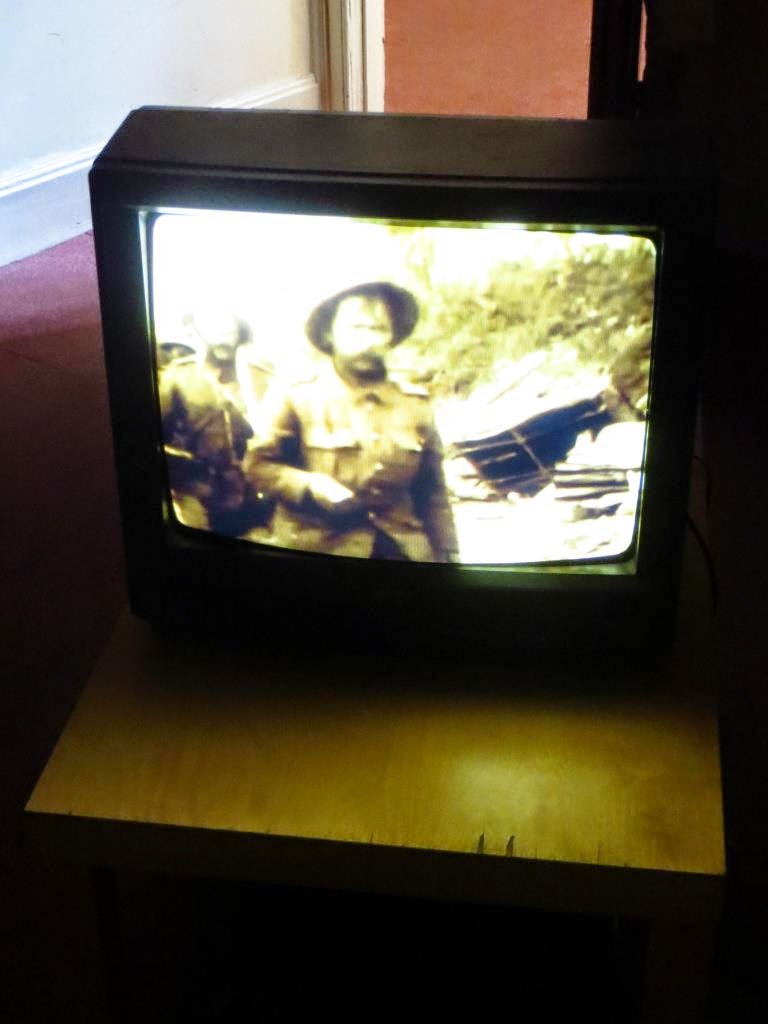 The main hall contains a number of works by each of the exhibitors. The hall is dominated by a 30ft nude by Paul McCullough - a 'panoramic drawing which echoes the rolling hills, valleys, hidden woodlands and open fields of the Mid-Devon landscape'. It is a beautifully executed work. 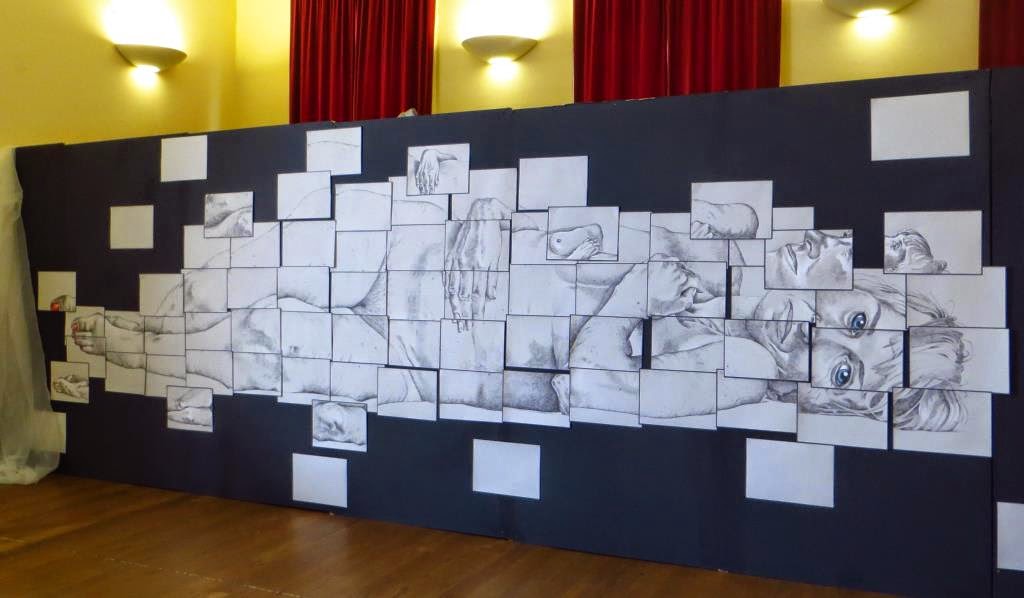 Another McCulloch work explores people's feelings about the routeing of the Crediton bypass: 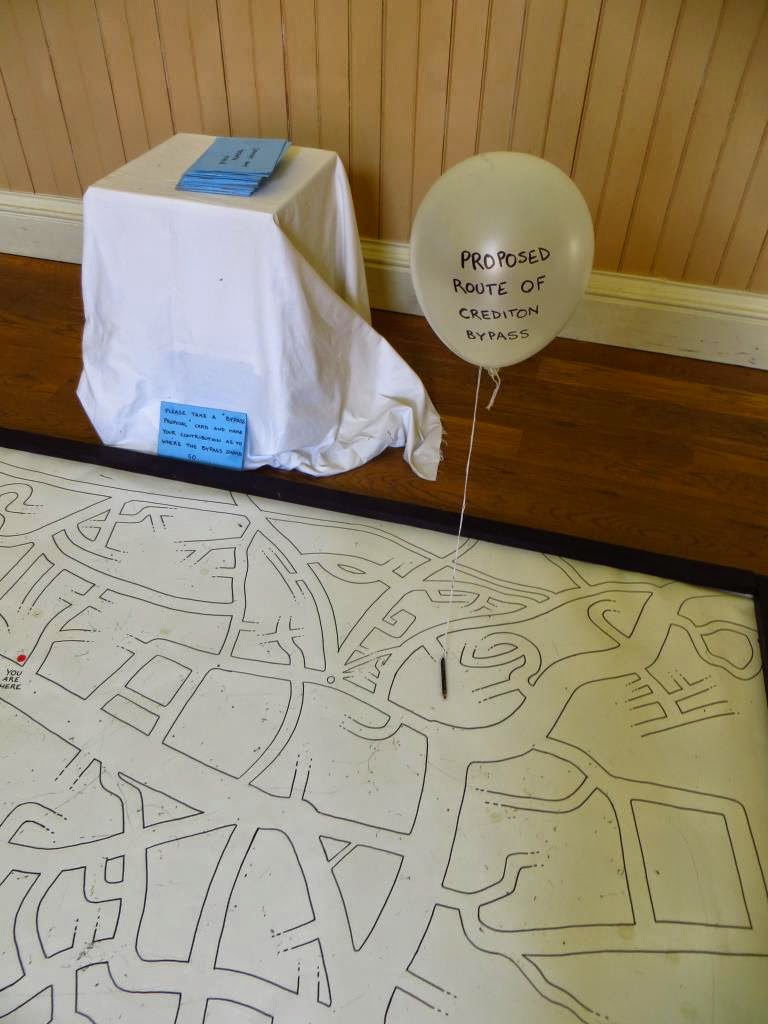 Amongst her four works on show, Nicci Wonnacott is showing her contribution to the Neoreplicants exhibition at Exeter Phoenix - a representation of 'The Woman in White' decorated with the 'white man's bones' and invoking the Ghost (and Death) of Capitalism: 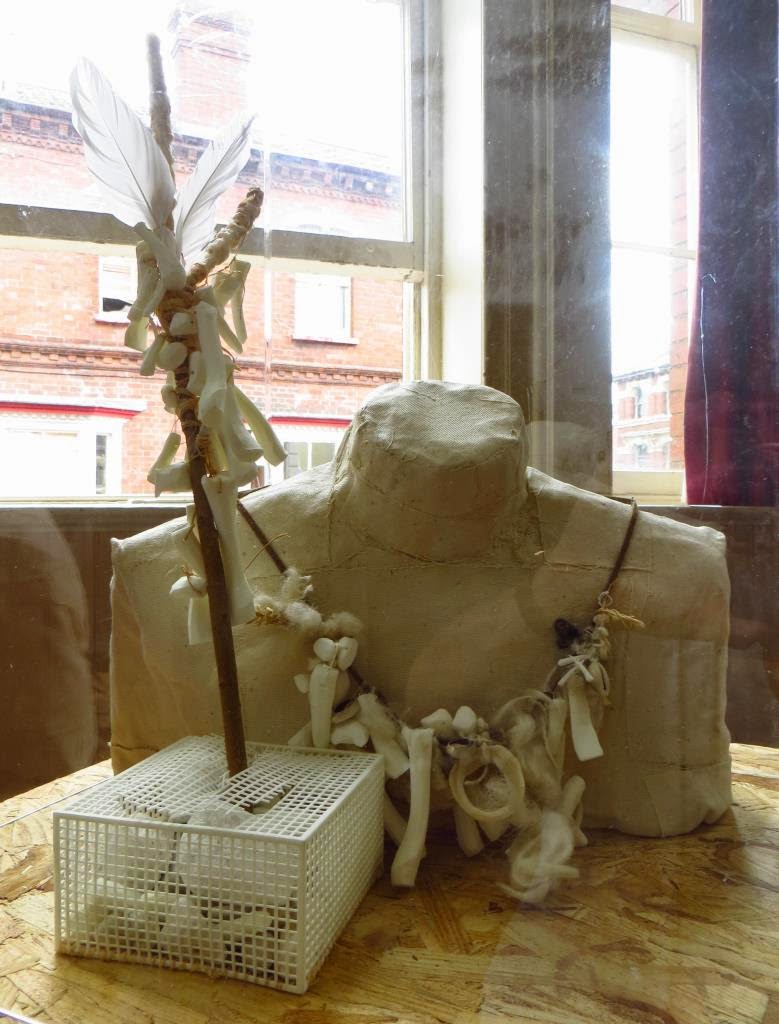 Another piece is 'White Rocks, the Borderline': 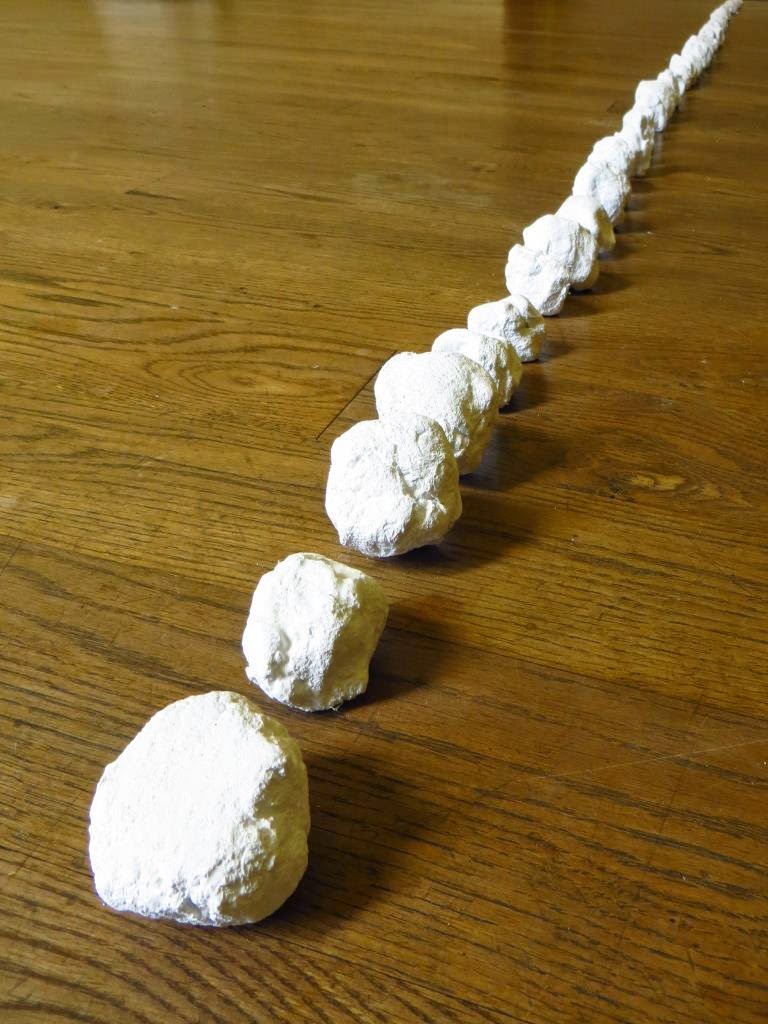 But my favourite piece of Nicci's is 'White Rags, MH17-298, Homage to the innocent victims of war': 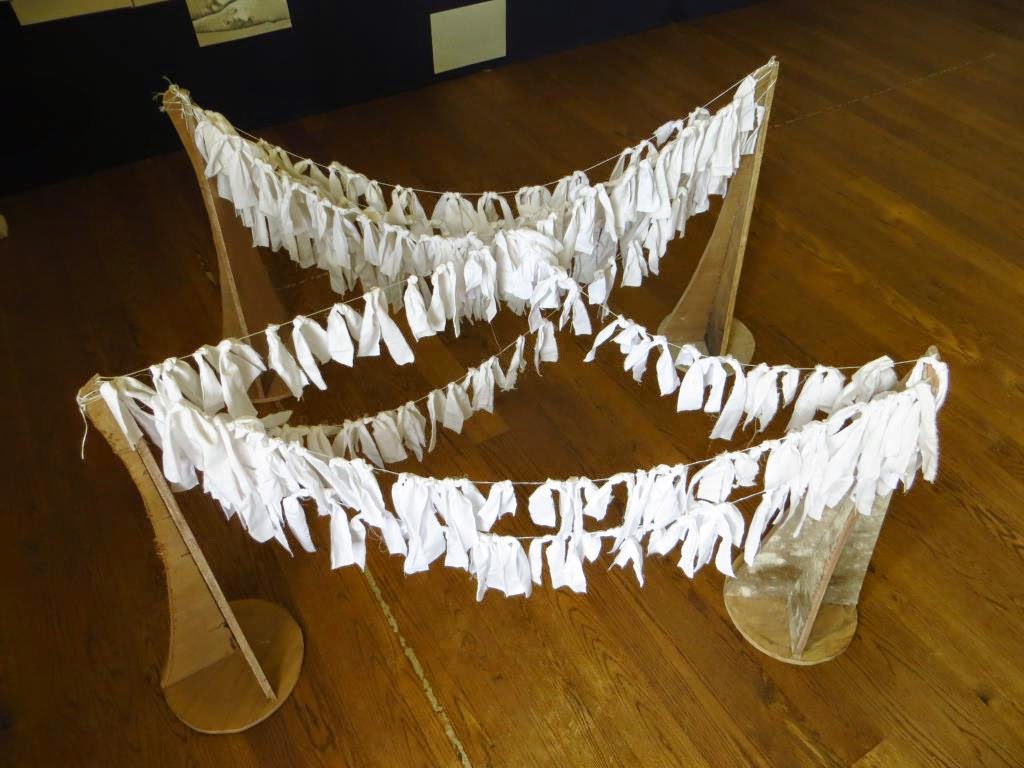 Tim Backhouse was stewarding on the day I visited and I am grateful for his insights. The most striking of his works is the film showing a continuous journey around the unopened Crediton bypass which is accompanied by opera playing on an old record player. The film is mesmerising, the more so because the highs and lows of the operatic soundtrack appear to accompany the action in a meaningful way, even though they are not synchronised. 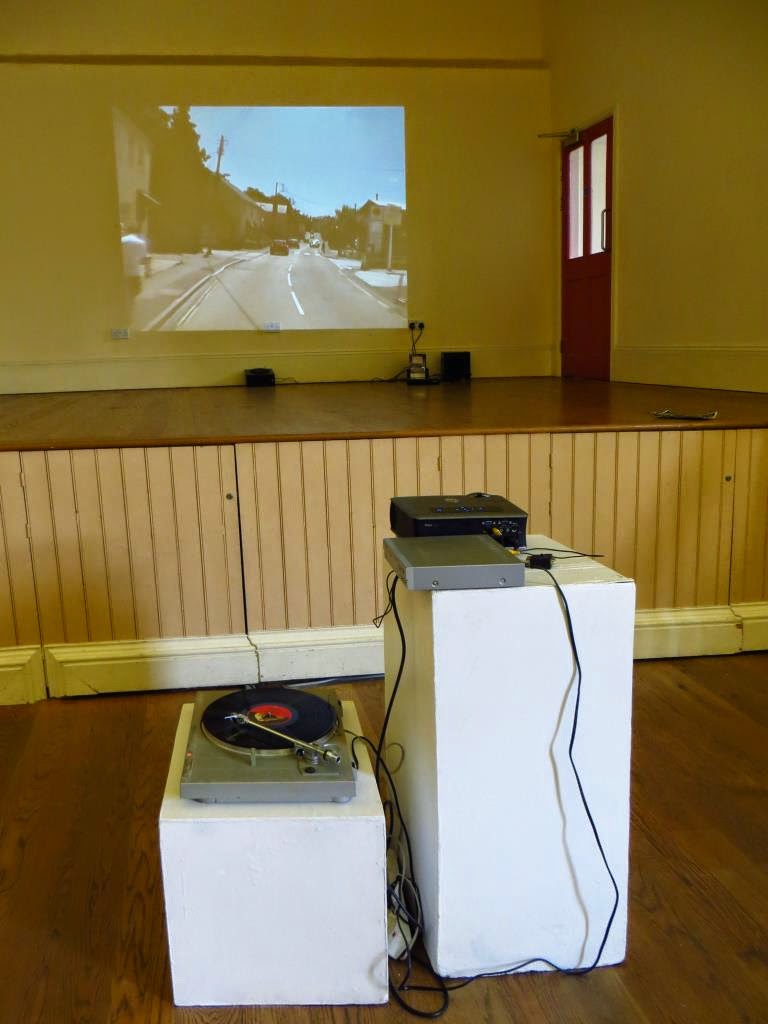 In all, this is an excellent and thought-provoking exhibition. If you get the chance to catch it over the next few days, then I commend it to you ... and you can enjoy a day out in Crediton, like I did today. 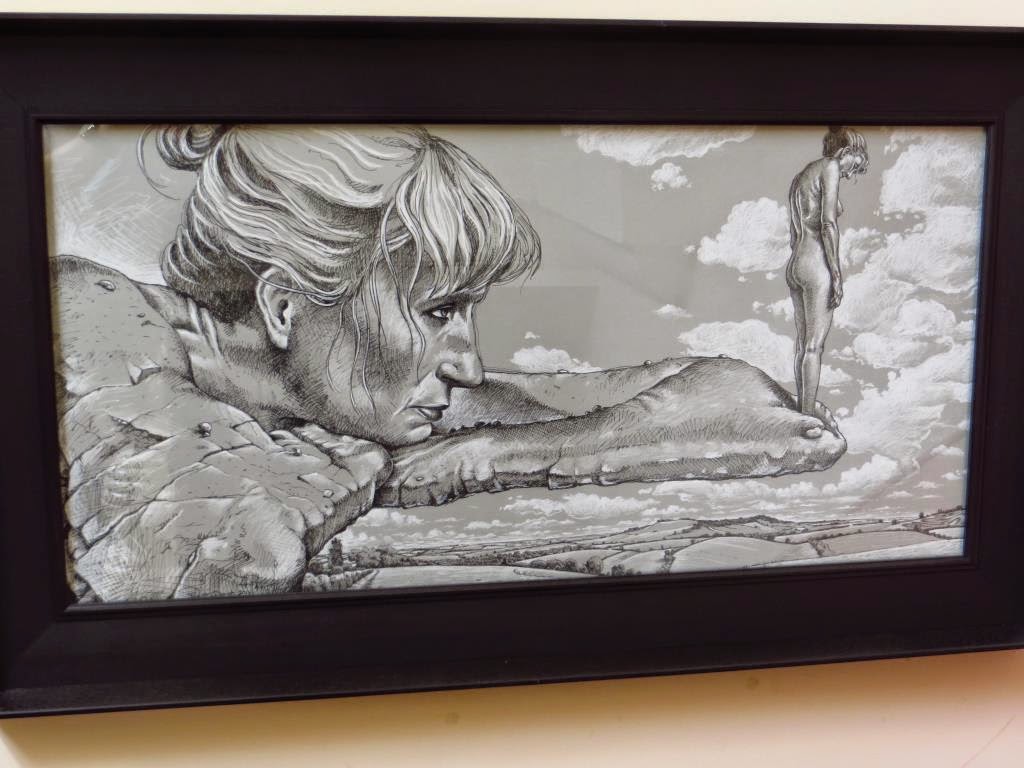