The Museum of Everything at Selfridges 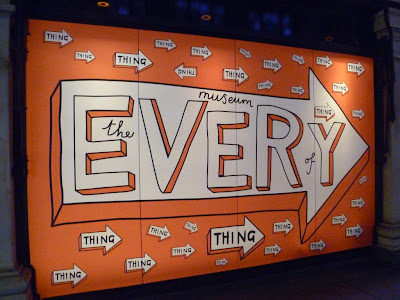 The Museum of Everything exhibition #4 has only a few days left at Selfridges in Oxford Street. 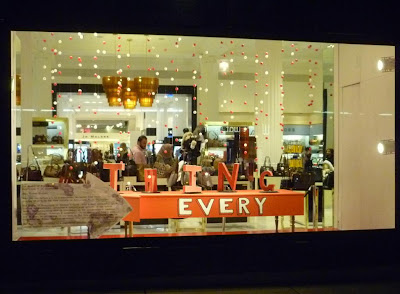 A few days ago I finally got to take a look at what's on show. The store has given over all their Oxford Street windows to the Museum and each window has large scale models of works from the exhibition. A selection of window photos - snapped between Oxford Street shoppers - are shown below: 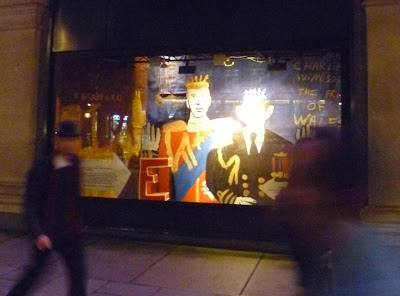 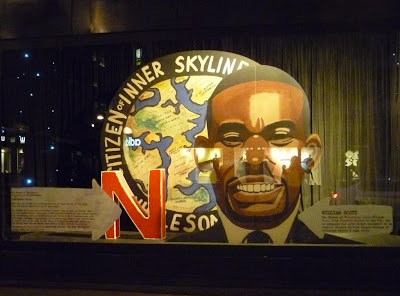 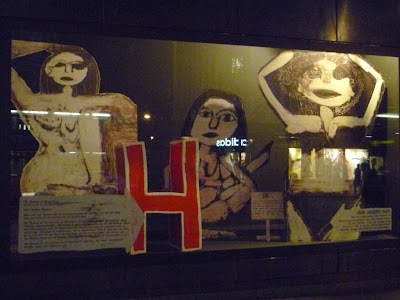 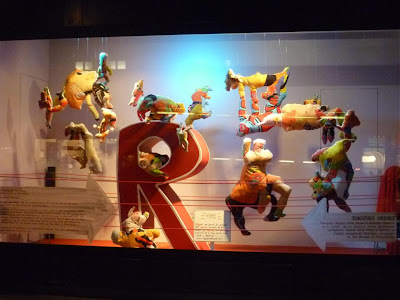 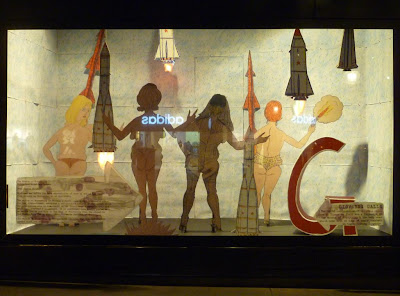 The exhibition space is in the basement - the Ultralounge - and is smaller than I expected (smaller than suggested by the extent of the window displays). Nevertheless the Museum has packed in over 400 pieces of work.


Previous Museum of Everything exhibitions have contained Outsider Art, but the art has been by recognised artists (to a greater or lesser extent). The best known of these has probably been Peter Blake and material from the former Walter Potter Museum (see previous post on this). Exhibition #4, however, features work from people with developmental and other disabilities from across the world. In the words of the Museum itself it is "Britain's first and only museum for the unintentional, untrained & unknown artists of our modern age".


In addition to the work itself there is a lot of interesting background information available in the exhibition about the artists and the studio workshops where they are based.


The exhibition is fascinating and has attracted a large number of visitors - although it has also attracted some criticism, notably from Adrian Searle in the Guardian. It is true that it does feel a bit uncomfortable being critical of some of the work (it's not all brilliant) because the artists are not professionals and are, in fact, disadvantaged in some way or other. However, the great majority of it is as good as the work of 'regular artists' and much of it is considerably more interesting.


If there is a theme, it is that of the obsessive/compulsive - one that all art-lovers and collectors can easily relate to. You can view some of the exhibition works digitally here - but it's not really a substitute for seeing the show, which has a wider range, including a significant number of sculpted and made objects (the images reproduced here are from the digital museum).

In addition to the exhibition itself there is a Museum shop containing some rather expensive mementos and the equally expensive books of exhibitions #1 to #4. It seems churlish to criticise but, as a registered charity, you do wonder about their marketing strategy - and why is there no entry charge? However, you can view and buy Museum merchandise online at the Shop of Everything - it's in a good cause. 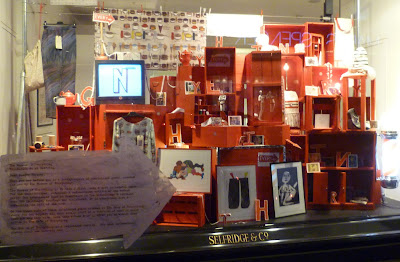 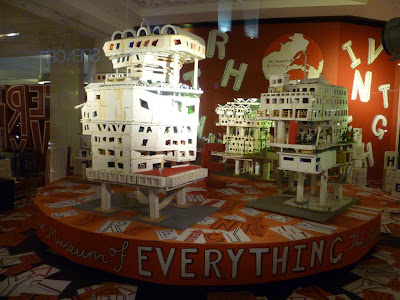 The last day of the exhibition is 25th October.
Posted by Steve at 23:57 No comments:

Last Saturday Ian Siegal and Wilko Johnson were on stage at the Phoenix. I didn't know Siegal previously but he has been around for a while and is very well-regarded. Earlier this year he won the British Blues Vocalist Award. 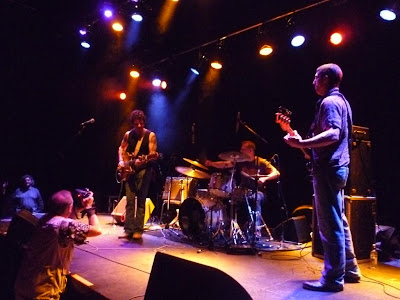 His website says that if Siegal been around in the sixties he would today be accorded the same reverence as artists such as Van Morrison, Joe Cocker and Eric Clapton and quotes Muddy Waters' son as saying that If my Daddy were alive today he'd say “That's my boy!". 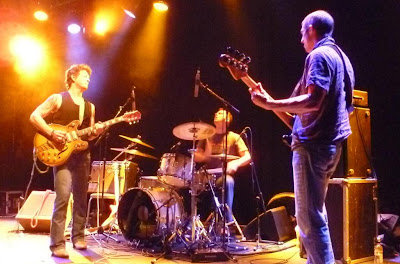 He looks like a cross between a young Mickey Rourke and a shorn Alan Davies. His material is original but seems authentic without being hackneyed or derivative. On Saturday he was playing with drummer and bass support. I've seen a lot of blues guitarists and most succumb to self indulgence but Siegal played a flawless well-paced set supported by a tight rhythm section and the crowd loved it. 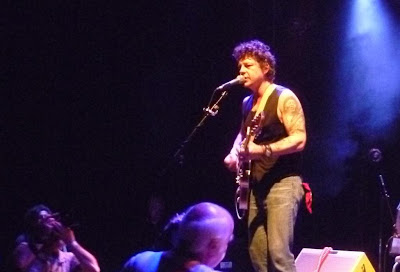 Ian is headlining the Torquay Blues Festival on 5th November - Get along there to see him playing solo. 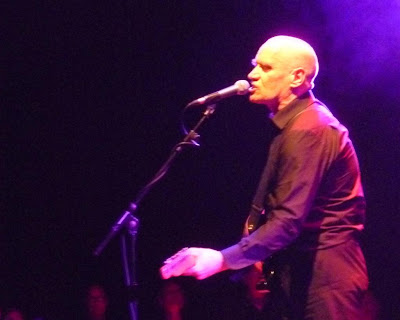 After Siegal, Wilko Johnson seemed a bit of an anticlimax at first but once he got going, we soon got the point. Wilko is not subtle - he is raw. The Feelgoods at their best (when Wilko was with them) were raw - Every bit as raw as punk and in many cases rawer. The award-winning documentary about the band, Oil City Confidential, explores their origins as a primitive pub-rock band in Canvey Island, up to the death of Lee Brilleaux, and beyond. 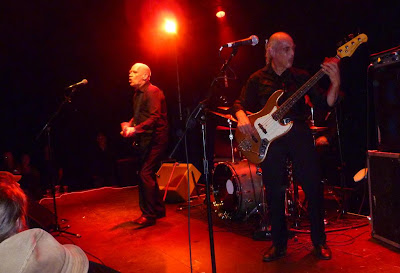 Wilko looks  much older now (it is 34 years later). Norman Watt-Roy, the bass player from the Blockheads, and Wilko together look like the Sopranos/Krays and are dressed in the all-black uniforms of your local coffee shop baristas. 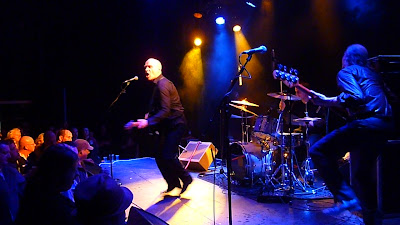 Watt-Roy is like a demented goblin frenetically plucking his bass in a puddle of his own sweat. Wilko still has that manic look of old and periodically storms back and forward, machine-gunning the audience with his guitar. His voice is not strong like Lee Brilleaux but it is effective enough. 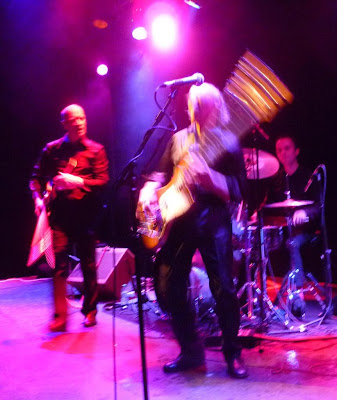 They produce a wall of noise and the audience love it - especially the old favourites: Back in the Night, Roxette, She Does it Right, and Bye Bye Johnny. We are in the presence of a legend ... Unfortunately I was standing in front of the speaker stack again and my video sound was badly distorted - but here are Wilko and Norman playing She Does it Right in the 1980s:

And here is the great Lee Brilleaux doing the vocal honours on the same number back in 1975:

So farewell then ... Elisabeth Sladen

Elisabeth Sladen, the iconic and most popular Dr Who companion, sadly died earlier this year at the hard-to-believe age of 63. She appeared as a regular in 18 stories over 4 seasons of the classic series, and in 4 episodes of the revived series, as well as in the spin-offs K-9 and Company and The Sarah Jane Adventures. The Sparks in Electrical Jelly blog carried an excellent appreciation of her work with the Doctor. 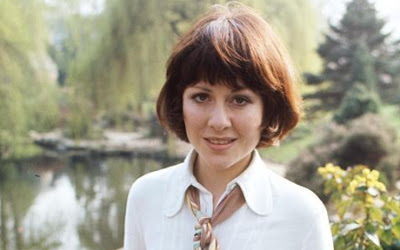 The Sarah Jane Adventures, which was written for Sladen, is back for the final series of 3 two part stories on CBBC. The series is about half way through, but you can still catch up on BBC iPlayer. Also coming up on 14th October, on the Sky Watch channel, is the episode where Sladen first reprised her role - School Reunion - featuring K-9 and David Tennant. 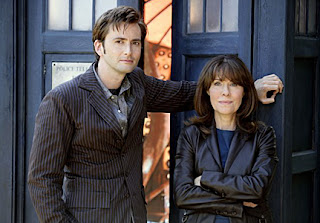 You can see some interviews with Elisabeth Sladen from 2006 on the BBC Norfolk website and her autobiography will be released on 7th November. Here is a selection of pictures of her with various Doctors over the years: 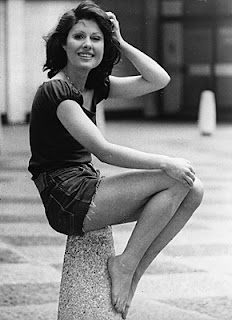 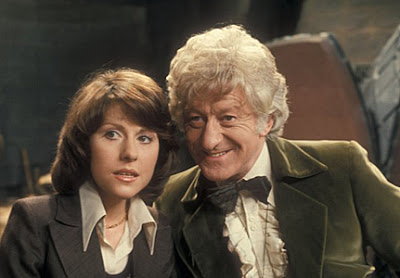 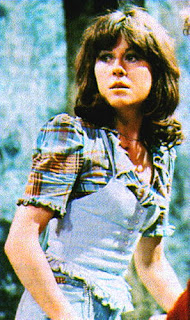 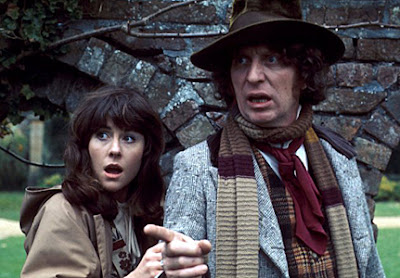 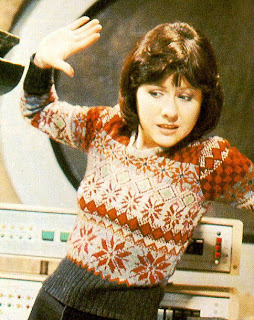 And finally, here on the Emmapeelpants blog, is a nostalgic piece about Dr Who companions in miniskirts - Sara Jane would have had none of that!

No matter what you think about the Apple zealots (and iTunes software) it's impossible not to be affected by the death of Steve Jobs. At Apple he has been at the forefront of so much technological and design innovation which directly affects our lives - from the Mac, through the iPhone to the iPad. In the words of AP he had a key role in "reshaping the world's digital landscape". In business terms  "he saw what consumers wanted even before they knew what it was, and positioned Apple to exploit that need" (Loren Steffy).


Who would have thought, when we were kids, that we would be able to carry our whole collection of albums on a device smaller than a packet of fags (or for that matter, that the concept of a packet of fags would become alien to most of us in the 21st century).


One of the most interesting and touching tributes has been from Steve Wozniak who worked with Jobs from the beginning (you need to click to view the video). 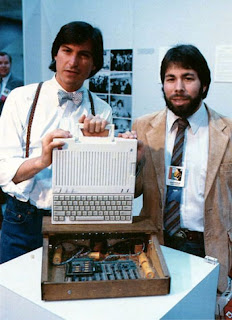 The Mac has long been the PC of choice for creatives (and stylistas) all over the world, while the iPhone and the ability to use apps has allowed thousands to be creative and develop their own applications. There is now an app for pretty much everything. 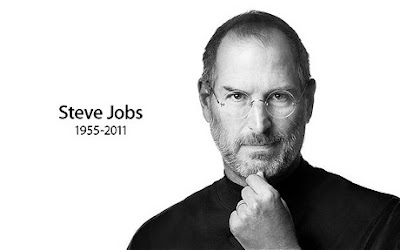 An example of the creative applications which Apple has seeded is the Barbarian Group's iTunes visualizer, called the ‘Magnetosphere’. Here it is in action (best watched full screen) - a brilliant realisation of Solar by Flight404. The music is by Goldfrapp - Lovely Head from the album Felt Mountain:

You can download Magnetosphere from the Barbarian Group. They are currently developing the visualizer further to have the program decipher the lyrics of the tracks and integrate them directly in the visualization.

Pretty cool - and totally Apple/Steve Jobs ...
Posted by Steve at 08:38 No comments:

The Crazy World of Arthur Brown and Focus at Exeter Phoenix 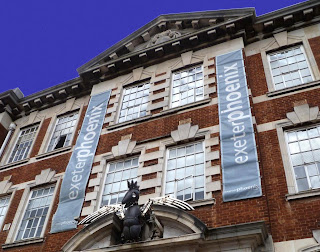 First up was Arthur Brown, who didn't seem to have changed much physically from those old 1968 performances of Fire.


He started the set in a black hood and then had regular quick-changes of clothes throughout the set. Howard Marks, in his foreword to Polly Marshall's The God of Hellfire: The Crazy Life and Times of Arthur Brown, says:


The Crazy World of Arthur Brown were the first psychedelic soul spectacle, a memory that neither experience or drug could ever erase ... the cops busted Arthur because his music made people take drugs. They were right. It did.

Brown's life has been every bit as incident-packed as that of Marks. Arthur Brown was there when pretty much when everything important happened back in the sixties.

Not only did he have huge success in America, but he played with all the big names, lived a life of excess, was arrested and jailed, and has generally had an incredible life (try reading the whole of Howard Marks' foreword on Google books - or better still buy a copy of Polly Marshall's book and be amazed). 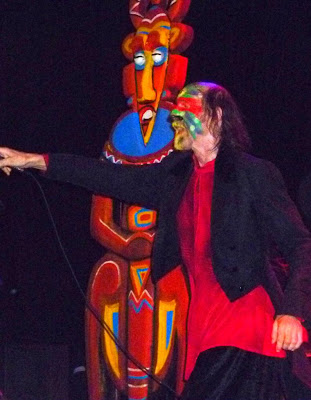 Today's show is a pretty tame compared with those heady days, but is enjoyable and great nostalgia for an audience of a certain age. His band - The Crazy World - are all young. The keyboard player, Lucie Rejchrtova, acts as a foil to Arthur's antics on stage, along with Angela Fallon who dances with the band. They started the set with Dylan's Hard Rain and included an excellent version of Kites - the old hit for Simon Dupree and the Big Sound - who went on to become Gentle Giant.

The remainder of the set included I've Put a Spell on You and of course Fire! (with no combustion - although he was apparently performing with the flaming headdress as recently as 1997), as well as some numbers from his psychedelic repertoire. It was a good show - especially when you consider that Arthur is 69 years old. There was, disappointingly, no time for an encore as the stage had to then be reset for Focus. 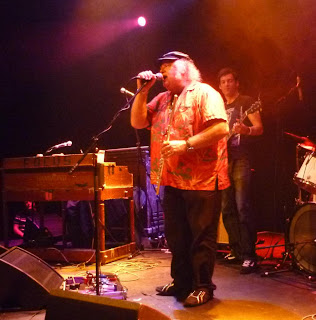 Thijs van Leer, the sole remaining original member of Focus is 63, but the rock and roll lifestyle has not treated him well - He was barely recognisable as the guy from the 1970s as he shuffled on stage with a plastic carrier bag containing his stuff - his flute, melodica etc.


But once they got going it was clear that he has lost none of his passion for Dutch melodic rock, or his jocular approach to the full range of whistling, nonsensical vocals, falsetto singing, and yodelling that he is known for. 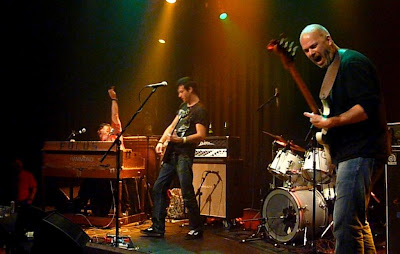 The hits were all there: Sylvia, Hall of the King, and Hocus Pocus.The guitarist,
Menno Gootjes, and the bass player, Bobby Jacobs are both talented players and at their best you could hear the roots of later work by the likes of Steely Dan (self-styled jazz-rock ambassadors to the galaxy). The veteran drummer Pierre van der Linden also put in a lot of effort and did the obligatory - and dull - drum solos. 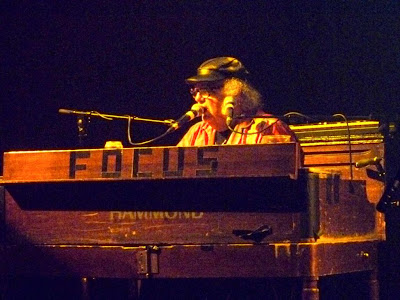 The fans loved it but, honestly, I would have preferred more Arthur Brown. Nevertheless here's some vintage Focus, with Jan Akkerman doing the honours on guitar, while Thijs van Leer yodels ...