Topophobia, the title of the exhibition at the Spacex until the 7th July, is defined as the fear of place. It is the connecting thread between the works of ten contemporary artists who are on show here.


The project has been curated by Anne Eggebert and Polly Gould who also contribute to the show. It follows on from a previous exhibition organised by them in 2003 entitled Nature and Nation: Vaster than Empires, which also brought together the work of a group of artists to explore the similarities and differences between imperial powers and their possessions using botany and landscape as metaphors for their cultures (which worked a lot better than it sounds – see the book/catalogue ISBN 0951826212).


The current exhibition was initially conceived as being environmentally focused but, in its conception, shifted to the fear of place. There is a wide variety of work on display. Some of it is easy to appreciate simply as works of art in their own right, while others benefit from having an understanding of the piece in the context of the artist’s wider work.


The contributions of the curators are amongst the most accessible. Polly Gould has produced glass reflective globes that stand on circular watercolours of the Antarctic, based upon the sketches made by Edward Wilson from Scott’s expedition. The result, which is apparently based upon early attempts to produce illusionistic images, is like a pinhole camera effect (like the one on the observatory next to the Clifton Suspension Bridge). Meanwhile, Anne Eggebert has produced detailed pencil drawings of places in the style of Google Earth, linked with drawings that illustrate why the location is significant.


In the same room there are other accessible works: Abigail Reynolds has cut old photos to reveal alternative uses at other times – a simple but striking effect, particularly when, for example, an image of the Greenham Common countryside is intercut with images of the Women’s Movement camps at the same location in the 1980s. 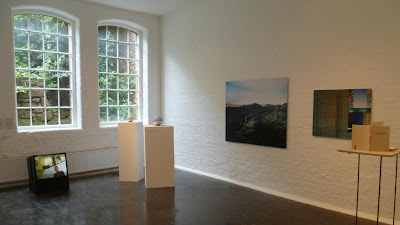 Finally there are Uta Kogelsberger’s photographs which do a sort of Magritte Empire of Light thing by showing us photographic detail that the human eye alone could not see at night; and Louise K Wilson's installation which is a continuous performance of a madrigal performed in a previously top secret Cold War testing site.


In a second room of the gallery there is Almut Rink’s work which uses architectural modelling software to show us plants and whole worlds being created electronically. If you look at the catalogue accompanying the exhibition you see that she is posing weighty questions such as Can digital images serve as surrogates for experiencing nature? and other existential issues. This is a case where it is helpful to read the catalogue and to look at the wider spectrum of the artist's work. Spacex helpfully provides plenty of associated reading material and catalogues that can be perused in the cosy lounge area.


Other exhibitors include Matze Einhoff, who has produced a video of where the Berlin Wall once stood, employing big screen production values; and Marja Helander, who has produced photographs contrasting modern life with the traditions of her Sami nomadic ancestry.


In the darkened third gallery room Emily Speed has created a body fortress made from shutters; and David Ferrando Giraut creates a state of anxiety with his filmic pan of the aftermath of a car accident.


The Spacex is having a bit of a makeover – The gallery is more welcoming, as is the new website. Why not call in and see Topophobia? – It’s on until the end of the week and it's free. Link to the Topophobia website here.