For the past few weeks I have been attending a short course of classes at Exeter Phoenix on modern art 'Isms'.  It's only a couple of hours a week for 5 weeks and so is inevitably selective. The course is run by Nicci Wonnacott, whose work includes performance stuff like this:

Before Xmas I did a one-day life class which Nicci tutored (advertised by the Phoenix as a chance to explore the face - so a couple of us were a bit surprised to find it was a full life-drawing class) and the discussions with her and the other artists from various backgrounds - all competent artists - were really interesting.

The discussions in the 'Isms' class are, of course, part of its appeal. Those attending include some who are studying art, some who are doing or have just completed art degrees, and others who have art experience or simply have opinions - sometimes strong ones.

Last week - week four - we covered almost as much again. Nikki is keen to redress the under-representation of the role women have played in developing art in the 20th century and one of the interesting things for me is that previously I was unaware of the work of many of the women we have considered.

There have been a few other things that have surprised me. Such as the important role that the Constructivists had in the 20th century revolution in art. I went to the Rodchenko and Popova exhibition at Tate Modern in 2009, which was pretty comprehensive, but it is not until you put each movement into the wider context that you can appreciate the true impact.

I am also a little surprised to find how directly derivative the work of some of our 21st century artists is. As we know, little is new under the sun, and most art references back to Art History, whether knowingly or not. Nevertheless, for example, work by the Faile and Jacques Villegle appears very closely related:

And some of Sarah Lucas's work seems thin and derivative when you look at similar work produced by Dorothea Tanning in 1967:

And don't get me started on Damien Hirst - just refer to the Stuckists ...

Earlier this week the tour guide at Tate St Ives told us that conceptual art is on the way out and figurative art is the future! Our final class is coming up this Thursday - I'll let you know how it turns out ... 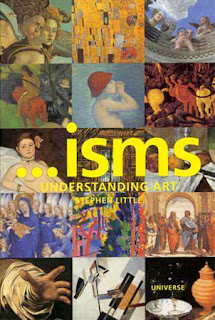 Incidentally, if you can't get to art classes at the Phoenix you could always try this book: Isms - Understanding Art by Stephen Little which I came across in the Tate shop. It does a pretty good job of covering art movements in a few paragraphs, from the Renaissance to Neo-conceptualism, and is well illustrated with examples. A snip at £7 from Amazon.
Posted by Steve at 20:18